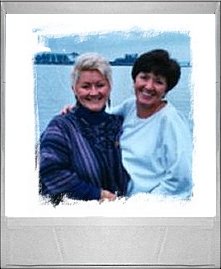 Her warmth and inspiration lives on…

God made us sisters but life made us friends… “

I found during the process of writing my book that it was always advisable to make notes as events happened so I would be able to remember each detail.

Well, this story will stay in my mind and in the minds of many others for years to come, no notes required. When my wonderful sister Kathy was diagnosed with breast cancer on June 6, 2001, I was there holding her hand and told her not to be scared… although I myself was terrified of what was to come.

And indeed it did, Kathy left us on June 13, 2001, seven days later to go to a better place. But before she left I held her and told her not to be scared and to send us an abundance of butterflies when she arrived safely on the other side. Well, she sure did. No sooner had she left but a nurse from the previous floor Kathy had been on came rushing into the room with a piece of paper formed into an envelope with my sister’s name on it… she told us breathlessly that she was told to bring it to us. Upon opening it we found a beautiful silk butterfly.

Months passed and we all had awesome butterfly stories to share with each other. On the year anniversary of Kathy’s passing I was at my daughter Patti’s house sitting in the garden when I saw a tiny butterfly grazing on flowers around me. I decided to try something, so I said very quietly “Ok sis, if that is you, please fly over and land on my foot. As my grandson A.J. walked out of the door, she landed on my foot. He smiled and said, “hmmm that must be Aunt Kathy!”

With tears of happiness in my eyes I smiled and said ” for sure.”

A.J. then returned to the house and she flew away. I watched her go and said out loud., ”Ok sis, let’s do this again… please land on my toe!”

Well, Kathy never disappointed me in life and she sure wasn’t going to now… she headed for my big toe, again, just as A.J. came out the door!

We sat and watched as this beautiful little creature walked around my toe and shared an hour of her busy time with us.

It was wonderful to see my grandson’s eyes widen with awe as he watched her go slowly around my toe and my foot… then she left!

It was not an easy chore for him to get me to leave and get on with my day. I wanted to stay and bask in the feeling forever .

It just happened he was having a “sleepover” at Gram’s that night and on the way he said “wouldn’t it be great if we had a huge butterfly on your deck in the morning Gram?”

I replied, “we will see what Kathy has planned for us.”

I went to my bed feeling peaceful that night and gave thanks to all involved with sharing those moments with us.

Upon wakening, coffee poured and relaxing, my friend Dorothy appeared with a smile and a parcel!

A.J. was still asleep so I suggested we go sit on the porch, but she said, “in a minute if you don’t mind. I have something I want you to open in here, it is for your deck.”

Our voices woke my grandson and her words got his attention. In the package was a BIG brass butterfly wind chime. A.J. just pulled the covers over his head and said, “O my God!”

We hung the gift and thanked all again!

Months and years have passed and although I believe we should not stand at their grave and weep, it isn’t always easy.

I have never been one to dread the “anniversary” of a loved ones’ passing and have always done something on that day that would make them happy. Plant a rose bush, take a walk, or, in my sister’s case, go for a pedicure. Kathy always took wonderful care of herself and a pedicure was one of those pampering moments she allowed herself.

I was not at all surprised when that special butterfly landed on my newly manicured foot that day in June.

Approaching the third year of Kathy leaving us, I was rather sad ,but knew she was in a better place so, upon wakening on Sunday, June 13th, I decided to have a coffee on my deck and
talk to my sis and tell her how much we all missed her and I told her to send us the biggest butterfly she could muster up and it had to be at my daughter Patti’s place so we could all share it. In the background, I could hear my phone ringing, but I decided it was only ten a.m. so they could call back. After all, I was busy putting in an order with my sis!

In the meantime, my brother dropped in and we chatted about the plans for the day…. celebrating his birthday at Patti’s.

I shared with him my request for yet another butterfly from Kathy and he said it would be awesome. The phone started ringing again so I decided I had better get on with my day.
Upon checking my messages, the calls were from my daughter telling me there was a huge butterfly on their back step and I had better call her.

Apparently her husband Bob had noticed it on the step an hour earlier… it appeared when I was talking to Kathy!

Need I say I hurried over… and there it was, on the step that everyone including the cat had to walk over to get outside and even weirder the screen door was dangerously brushing over it each time it opened.

After taking pictures of the butterfly, I suggested that we take it out to the picnic table with us. I will mention it was now 3 p.m. and it hadn’t made any attempt to fly away.

Sitting at the picnic table I put my hand flat out and said quietly, as before, “Okay sis if this is you, climb up on the back of my hand”.

Can you feel the tears?

Across the picnic table she started her little stroll and climbed up on my hand. Everyone was in awe, not a dry eye to be found.

To give you a visual, my grandson Michael was playing his new guitar for us and his sister Jesse was playing her viola. A beautiful day and we were honored to share it with this little creature that was sent to us, and it seemed, upon request.

Well, my sister was used to my optimism and me so I said quietly…” Ok sis, lets’ walk up my arm and get on my shoulder.”

Well, she always was a good listener and she slowly climbed to my shoulder!

It is not hard to imagine the look of joy and awe on the faces of everyone. My grandchildren continued to play the appropriate song for the day… “Song of Joy.” Time seemed to stand still and my little angel was on my shoulder but seemed to be trembling so I put my hand over “her” and as I had three years before told her not to be scared and if she needed to go she could and we were thankful for the time she had shared with us.

Through tears of happiness and thankfulness we watched as she began yet another flight on a never-ending journey.

We are not alone and need to listen to and trust the messages our angels send to us.

How does one compose and share a story that touches them so much? Easy, I say. Just sit down and let the words flow… many will benefit.

Many of you have read my dedication to my sister Kathy and the story of the awesome butterfly that appeared on the anniversary of her passing.

I truly believe our Guardian Angels are around us at special times and Mother’s Day was a very happy time for Kathy and me. She was so proud of her two daughters Denise and Jacqueline and throughout our growing up years referred to me affectionately as her mother. We shared the birth of her objects of affection… the labor pains, the tears and the joy of their arrival, not to mention their growing up.

Today, Mother’s Day 2005 was a day of reflection for me and many mothers around the world. Myself, for my three children and six grandchildren and for the mother energies I have had in my life… they taught me many life lessons!

This beautiful Sunday morning I shared a sunrise coffee with my sis on my deck overlooking beautiful Georgian Bay. I thanked her for being my Guardian Angel and asked her what she was going to do today to let me know she was in the area, so to speak!

Well, I again asked her to send me a butterfly and please make it a big one. Kathy was used to my being specific and never let me down, either in life or spirit! I soon found out that today was not going to be any different.

My wonderful grandson A.J., the one who shared the other Kathy/butterfly appearances was going to be the bearer of my Mother’s Day gift from his favorite aunt. He appeared with a big bag in hand and a smile on his face, a kiss and Happy Mother’s Day wishes. As I was opening the bag he said, “Sorry Gram… looked for a small one but had to get this one”. Of course we know what I pulled out of the bag. A beautiful pink silk butterfly.

Of course, the Universe decided to make this moment even more special. I was opening the present in front of my laptop when my family picture screensaver decided to show my sister’s picture. AJ and I looked at each other and smiled.

Walking him to his car we saw our first real butterfly of the season… it/she flew around me and headed out and circled his car.

I thank Kathy and my ever present Guides for sharing today with me.

and receive Positivity in your Inbox!

You have Successfully Subscribed!

We value your privacy and will never share your information with anyone.  You will receive Carole's newsletter email periodically.
You may unsubscribe through the link at the bottom of one of her emails or you may contact her directly - see the Contact page.